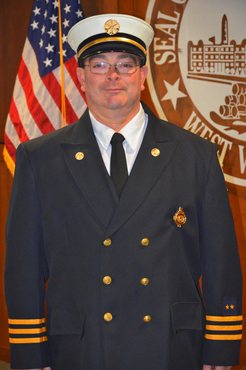 Chief Jim Blazier has led the City of Wheeling Fire Department since June 2021.

Until his appointment as Chief of the department, Blazier served in an administrative capacity for 12 years as training officer, EMS squad training officer and supply manager for EMS and firefighting equipment. Blazier is also a public safety instructor for Mountain State Education Services and is a registered nurse at MedExpress.

In 2017, Blazier was named as the department’s “Firefighter of the Year.”